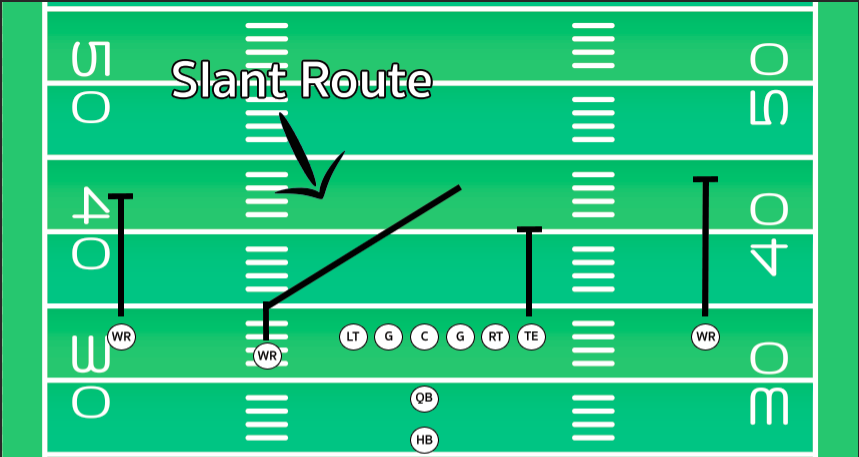 Keeping up with all routes, positions, and plays in football can be confusing, often leading to some miscommunications on the football field. Luckily this guide is on hand to break down exactly what a slant route is in football.

A slant route in football is a short route that involves the receiver taking a few steps down the field before cutting on a forty-five degree angle towards the middle of the field.

Slants routes are one the quickest thrown routes in football with the receiver only taking a few steps before they start looking for the ball on.

On a slant route, a receiver is able to create separation early on in the route by making the cut towards the middle of the field.

This is especially true if the cornerback is giving the receiver a cushion.

After making the cut on a slant route the receiver will continue to run on a 45 degree angle across the field.

The ball can be thrown to the receiver at any point after he/she makes their cut. In most cases, a pass thrown on a slant is going to be before or after the player passes the middle linebackers.

What To Know About Slants In Football

Now that you understand what a slant route is in football is time to learn more about how this route fits into the game. Below we’ll break down several things you need to know about slants routes.

You Can Catch With Your Body (Sometimes)

One of the interesting parts of a slant route is that on some occasions it is best to use your body to catch the ball.

As a wide receiver, one of the cardinal rules is to catch the ball with your hands and not your body. This gives you a much better chance of catching the ball and also allows for you to reach out for the ball as opposed to it coming to you.

Though when it comes to slant routes there are some benefits to using your body. When running a slant route the receiver is going to put himself between the defender and the quarterback.

This gives the receiver the ability to protect the ball with his body. By caressing the ball into the receiver’s body the defender will have a much harder time breaking the pass up.

This is especially helpful in short-yardage situations in which gaining yards after the catch is not necessary.

Another important factor about slant routes is that they can present a great opportunity for yards after contact. On slant routes, the receiver is going to have a lot of lateral momentum.

Since the receiver is moving quickly across the field they are often able to run past flat-footed defenders.

If a receiver is able to lose the man covering him slants can quickly turn into large gains. In order to gain a lot of yards on a slant, a receiver needs to maintain their speed when catching the ball.

Another interesting fact about slant routes is that they are often used in short-yardage situations. Goal-line plays, as well as third and short situations, are two in-game examples in which you will often see slant routes used.

These plays are often used in short-yardage situations when the defensive player covering the receiver is giving them a cushion.

A cushion refers to the distance between the cornerback and the receiver when the play starts. If there is a big gap between these players to start the play the receiver can quickly cut to the middle of the field and gain separation.

This allows for a quick, high probability pass to be thrown with little to no risk of a sack or tackle for loss.